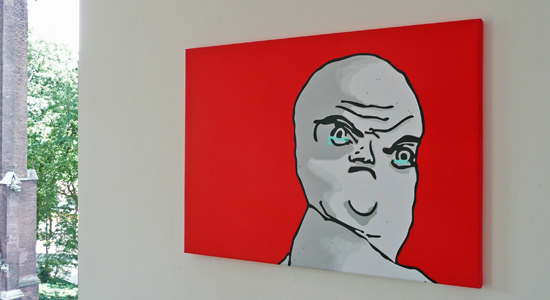 The canvas above is an adaptation of one of the many rage faces which are used in so-called rage comics. I recreated the original 'actually…' rage face in vector format, allowing for a high quality print on canvas. If not figured out by now, this one and this one are good rage comics featuring the 'actually…' face which illustrate the meaning of the emotion depicted on the canvas.

Originally originating from 4chan, Reddit, a social news website, took the liberty to extend the rage comics Internet meme and give it its own subreddit called fffffffuuuuuuuuuuuu (or short f7u12). There you will find lots of similar hilarious rage comics.